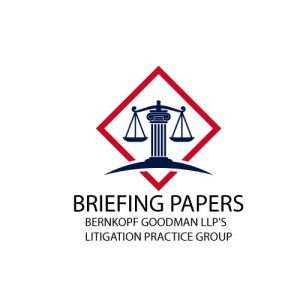 This is our inaugural edition of Bernkopf Goodman LLP’s Litigation Practice Group “Briefing Papers.”(1) As the title implies, our objective with the Briefing Papers is to impart information on our Litigation Practice Group’s activities and provide information and guidance on litigation and related issues that will be of interest to our readers. We welcome your feedback and your comments.

Bernkopf Goodman LLP’s Litigation Practice Group’s New Additions and Promotions
Amidst the COVID-19 (Coronavirus) pandemic, Bernkopf Goodman’s Litigation Practice Group has continued to expand and to promote from within. We first wish to congratulate Bob Stetson, a member of our Litigation Practice Group, who was elected as a full equity partner. Bob is a graduate of Trinity College and a cum laude graduate of Suffolk University Law School. Previously, Bob served as a law clerk to the justices of the Massachusetts Superior Court and has been recognized by Super Lawyers as a “Rising Star” since 2014. Bob’s clients include real estate developers, general contractors, and real property owners.

Considered by many of Bob’s clients as their “go-to” lawyer, Bob has earned well-deserved praise from judges and fellow lawyers alike for always being well-poised, through, and always well-prepared.

Growing up as the oldest of four boys in the hills of Western Massachusetts, Bob spent most of his free time on ball fields and in hockey rinks. However, as the father of two young girls, Bob now spends most of his time at dance studios and horse barns.

We also welcome Brittany Ling as another new member of our Litigation Practice Group. Britt, who hails from Texas, is a Bernkopf Goodman associate attorney who has spent most of her time with our Real Estate Practice Group. That group has graciously allowed Britt to split her time with the Litigation Practice Group to help out with some of our larger construction and real estate litigation matters. Britt received her undergraduate degree from Louisiana State University and her law degree from New England School of Law. Britt will be getting married next September and plans to go “glamping” with her future husband.

Finally, we welcome two new law clerks – Michael Parisse and Bianca Tomassini – to our firm. Michael received his undergraduate degree from the University of Massachusetts in Amherst, Massachusetts, and is currently a student at Boston College Law School and will graduate in May 2022. Michael has varied personal interests ranging from building personal computers to fishing for small and large game. Michael has served as a volunteer for St. Michael’s Church and the Walk to the Hill for Civil Legal Aid. Bianca is a cum laude graduate of Babson College and is currently a student at Suffolk University Law School and will graduate in May 2022. Previously, Bianca served as a legal intern to U.S. District Court Magistrate Judge Marianne Bowler and Probate and Family Court Judge Abbe Ross. Bianca has also served as a volunteer for the Special Olympics and the Boys and Girls Village.

Effective May 1, 2021, the Massachusetts Superior and Housing Courts will conduct trials before six-person (as opposed to 12 person) juries with or without the parties’ consent. Each party litigant will be limited to four peremptory jury challenges regardless of whether additional jurors are empaneled. Jury empanelments may, if the party litigants jointly elect, be conducted remotely, and civil jury trials may be conducted entirely remotely with the written consent of all parties and their waiver of any objections to the jury pool’s composition.

His trial began on Monday, April 26. Only 26 people will be allowed in the courtroom, which is over 2,600 square feet in size.

Scheduling trials in the U.S. District Court may prove to be difficult, however, as there are only a limited number of courtrooms available large enough for jury trials because of social distancing and COVID-19 safety procedures.

A Primer on Alternative Dispute Resolution Methods
As a result of the trial backlogs in the state and federal courts, many of our clients have inquired about alternative means to resolve their civil disputes. These means are generally called Alternative Dispute Resolution (“ADR”) procedures. Primarily confined to construction and labor disputes in the past, ADR is now widely used for the entire gamut of civil disputes, including construction, patent infringement, personal injury, contract, employment, and divorce and family law disputes.

Typically, ADR procedures require the parties’ mutual consent – often contained in a preexisting agreement – or such procedures are mandated by law or court rules. ADR has been touted as being more cost-efficient and less expensive than in-court civil trials. Still, ADR procedures like arbitration, for example, that are binding on the parties have limited appellate recourse and often impose significant limitations on pre-hearing discovery. Further, unlike a typical civil bench trial where the judge issues a written decision memorandum, an arbitrator(s)’ decision (called an “award”) does not generally specify the reasons for the arbitrator(s)’ award. ADR proceedings are normally private.

Listed below are the most typical types of ADR proceedings:

Administered ADR requires the active involvement of an ADR administering entity such as the American Arbitration Association or JAMS. The ADR administrator typically functions like a court clerk by arranging and managing the conduct of the proceedings, including providing filing, docketing, logistical and administrative support. The ADR administrator typically charges a fee for its services in addition to the fees charged by the arbitrators. There are several different administered ADR methods:

Arbitration is a voluntary adjudicative process in which an impartial third-party considers the parties’ arguments and their evidence and then renders an award. Arbitration proceedings are binding, but they can also be non-binding if the parties so elect. The parties can also structure the arbitration process themselves, and proceedings are subject to the administering agency’s procedural rules. Arbitral rules awards cannot be judicially appealed except in very limited circumstances.

Generally speaking, there are two types of mediators: evaluative and facilitative. Facilitative mediators attempt to assist the parties in achieving a mutually acceptable solution. Evaluative mediators may offer an opinion on each party’s likelihood of success in an adjudicative proceeding or propose the “best resolution” that the mediator considers fair and commercially reasonable. The mediator has no authority to impose any outcome on the parties and only controls the mediation process, not the result.

A collaborative law agreement is entered into by the parties and their lawyers, the latter in each of their individual capacities. The lawyers are required to terminate their representation of the party client if the collaborative process is unsuccessful and the matter proceeds to litigation. Under the collaborative law process, the lawyer’s role shifts from being an advocate in an adversarial process to an advocate in a collaborative environment where there is a mutual commitment by lawyers and the parties to settle the dispute outside of the traditional litigation model. The process is based upon a problem-solving model rather than an adversarial model.

Litigation Practice Group Lawyer Jason Manekas Defeats Boston Redevelopment Authority’s (“BRA”) Efforts to Unwind A Foreclosure Sale
The BRA now conducts business as the Boston Planning and Development Agency. In a recent case handled by Litigation Practice Group partner Jason Manekas, the BRA held an affordable housing covenant on property in Charlestown. When the owner defaulted on her mortgage, the BRA had an opportunity to pay the mortgage debt to acquire the property and preserve the affordable housing covenant. However, the BRA failed to pay off the mortgage debt, and the property was sold in foreclosure, which wipes out the affordable housing covenant. Although the BRA attended the auction and attempted to chill the foreclosure sale, Bernkopf Goodman’s client, a commercial developer, acquired the property and began renovations. Several months later, the BRA filed a lawsuit against Bernkopf Goodman’s client seeking to unwind the foreclosure sale and asserting claims alleging violations of the power of sale, breach of the duty of good faith, unjust enrichment, affordable housing violations, civil conspiracy, violations of G. L. c. 240, §§ 6, 10, and intentional interference with contractual relations.

Attempts to resolve the matter with the BRA were unsuccessful. Forced to litigate, Manekas argued that post-foreclosure claims were unavailing and that the equity of redemption had already been wiped out upon the “fall of the gavel” at the foreclosure auction. Since the BRA couldn’t establish an actual defect in the foreclosure process leading up to the sale, the Superior Court dismissed the BRA’s complaint. The Appeals Court then upheld the decision, and the Supreme Judicial Court denied further review. Bernkopf Goodman’s client is now completing its renovations to the property.

Litigation Practice Group Lawyer Peter McGlynn Successfully Closes on Construction Contracts for Projects with a Combined Value of Over $300 Million
Despite the COVID-19 (Coronavirus) pandemic, Litigation Practice Group clients have been rolling out new construction projects in record numbers. In the first quarter of 2021, Litigation Practice Group partner, Peter McGlynn, successfully represented owner and developer clients in closing on construction contracts worth in excess of $300 million, including two apartment and one condominium projects in Boston valued at $50 million; a multi-family project in Quincy valued at $120 million; a single-family residence located in the Berkshires valued at $45 million; a gut renovation of an existing building in Bedford, MA to be converted into lab and science space valued at $40 million; and four multiple single-family residential projects located in the Atlanta, GA area valued at approximately $80 million.

McGlynn reports that projects laid dormant during the early part of the COVID-19 (Coronavirus) pandemic are now starting to break ground. McGlynn offered that construction activity for the second quarter appears to look even more brisk in the first quarter of 2021 as new projects are slated to begin in the greater Boston area and in other locales ranging from multi-family, mixed-use, lab and science and commercial construction.

[1] A “briefing paper” is a document summarizing one or more issues and is used to inform decision-makers on current issues. https://www.edu.gov.mb.ca/k12/cur/socstud/frame_found_sr2/tns/tn-21.pdf

[2] The Massachusetts Trial Court reports that it has a backlog of approximately 3,500 trials.